This article originally appeared on Alexis Hernandez’s blog Me and My Sweet P.

“What about your education and track?”
“You are so young!”
“You are going to ruin your life, our lives, and that baby’s life.”

These are just some of the words I heard after announcing that I was pregnant. I was told that getting an abortion was the right choice, that God would forgive me, and that it would be too hard to be a mother in college.

Many people shared this opinion, however, very few talked to me about why I should choose love. No one talked about the love I would feel the first time I looked at my daughter, the joy I would feel waking up to her every morning, or how rewarding being a parent would be.

I remember the day as if it were yesterday–December 26, 2014. It started with an innocent trip to Walmart for puppy pee pads, however, earlier that day I found myself running back and forth to the restroom–something just didn’t seem normal.

As I passed the family planning aisle, something inside of me told me to pick up a pregnancy test. Up until that moment, I had not suspected that pregnancy was a concern, but I followed that gut instinct.

As I got home I quickly went to the restroom and peed on the stick. Those two minutes seemed to last an eternity, but it didn’t take long for me to notice that not just one but two pink lines were appearing.

I remember thinking it was a joke so I went about the rest of my night as if nothing had happened at all. The following morning I decided to take the last of the two tests. Again, the pink lines appeared. Things still did not seem real to me so I texted a friend and before I knew it we were on our way to the doctors.”

“There is your baby!” said the doctor as she pointed to a small gray circle on the monitor. My body was quickly filled with hundreds of emotions and in that moment I couldn’t even attempt to make sense of them all.

Before leaving, I was handed a goody bag. In it I found lotions, body mist, pamphlets, a picture frame for my sonogram, and a onesie that said, “I am loved.”

I was being congratulated for being pregnant, something that seemed to be so frowned upon, especially for someone who was young and unmarried.

For the next hour or two I paced back and forth, not knowing what to do or who to call. I reached out to my friends, all of whom had different opinions on the matter.

I also reached out to the baby’s father, whose opinion seemed to matter the most, at the time. As expected, his feelings towards the situation varied from day to day. It quickly became very clear to me that the final decision was up to me.

However, there wasn’t much of a decision to be made, because in my heart I knew what I wanted to do all along. I wanted to love.

“Before I formed you in the womb I knew you. Before you were born I set you apart” (Jeremiah 1:5).

I found myself reading these words over and over again from the pamphlet I received at the doctors. These words stuck with me and really got me thinking. I began thinking about all of the little things–what my child would look like, what his or her first word would be, if he or she would look like me or daddy, and all of the adventures we would share.

However, the thought of raising and being responsible for another person was such a scary thought. I wasn’t sure how I would balance it all. How was I going to go to school, practice, and have the time or energy to raise a child?

It was all so overwhelming.

Although I had made my mind up, I couldn’t manage to find the words to share the news with my family.

Throughout my childhood and continuing on into my teenage years, we had always had a great relationship, but this news wasn’t as easy to share. I didn’t want to disappoint anyone and I wasn’t prepared for what was to come.

It seemed like the easiest option was to hold this information inside of me. But I knew that before I headed back to Iowa for my spring semester I would need to tell them the news.

I paced back and forth for nearly 30 minutes before I finally got the courage to tell my mom. I figured she would understand because she had me at a young age and could relate.

She was in disbelief but not once did she raise her voice or say any harsh or unkind words. We sat there together and cried. In that moment it was clear that there was support and that the decision was up to me.

However, as expected, she reminded me about my obligation to my track team as well as my education. Sure, I thought about those things but those thoughts were drowned by all of the thoughts running through my head about who that tiny human would grow up to be.

The next to hear the news was my grandma, who seemed to be the hardest to tell. I never had the courage to tell my papa in person because I knew it would break his heart. I’m still very sorry that I didn’t.

I was an angel in their eyes and I did not want to disappoint them. At this point it was the day before I had to leave for Iowa and there was no way I could leave without sharing the news.

Again, I found myself pacing but after getting the courage I went to my grandma’s room and let it out. In between tears and deep breathes of air, I said, “I’m pregnant.”

Her reaction was far from what I expected. She was confused as to why I was crying, told me that everything happens for a reason, and  reminded me that the decision was mine to make but, when making the decision it was important that I looked at all of my options. What really stuck with me was when she said, “If any part of you thinks you will wonder what your child is going to be like, that is your answer.”

In that moment I knew that, despite the adversity that was to come, there was no way I could possibly go through getting an abortion.

After all, it was not my child’s fault that I missed my birth control or had unprotected sex. It was my own irresponsible actions that put me in this situation and it was not fair for that baby to suffer because I decided to take the easy way out or get rid of my “problems.”

I wanted to love that baby with my whole heart because I am a true believer that every thing happens for a reason. I wanted to know who my child would look like, what he or she would like to do, and who she or he would grow up to be.

From then on I would like to say that things got easier and that my pregnancy was smooth and easy sailing. However, it was far from it.

It wasn’t easy being told for five months that I needed to get an abortion because I was “trapping” a “man,” or that I was ruining everyone’s life, or that I was going to ruin my child’s life.

I found myself isolated from the things that I loved the most. Track was put on hold and it was as if I didn’t exist anymore. I was known as “the pregnant girl” and a day didn’t go by that someone didn’t awkwardly stare at my stomach. In the eyes of others I was another stereotype.

On the weekends when friends went out, I sat inside, if I wasn’t working at one of the two jobs I had at the time.

I had the support of my family and close friends but there was always a piece missing. I have always looked at pregnancy as something you go through with your partner, however, in an unstable relationship this isn’t always the case.

Some days the support and love was there and others it was nowhere to be found. There were times when I felt alone, isolated, and lost. Often times I wasn’t sure what to do or if I would be able to get through these bumps in the road.

I found myself wondering if the light at the end of the tunnel would be worth it. During these moments I had to remind myself why it was that I was choosing to love, especially when the other route seemed like the easier one, at least to those around me. 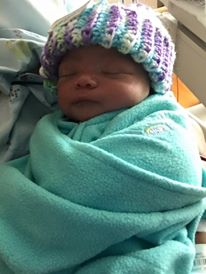 Now that I sit here, six months after the birth of my daughter, I think about why I chose love when I could have taken the easier way out, as others would say.

At the time, I wasn’t sure how I would manage to do it all, but here we are now, six months later and still pushing.

I can’t even begin to imagine how my life would be without her. Some may say I would have more “me time” or more freedom, but having a baby didn’t take that away from me. I still manage to fit “me time” into my schedule, but when given the choice, I would much rather prefer “us time.”

I chose to love because if I didn’t have a purpose then, I do now. This baby chose me to be her guide in this crazy world and it is up to me to show her the ropes, protect her, and love her.

I chose to love because she saved me. Sure, I was on the right path before her birth but there were times that I found myself getting lazy, not wanting to study for tests, settling for a C in a class instead of pushing for that A or B, wanting to go out with my friends, or not wanting to push myself at practice because things were “too hard.”

Now the tables have turned. Everything I do, I do for her. I stay up at late hours of the night to study for tests and to get assignments done so that I can spend my weekends with the most precious little girl in the whole world.

My life is now much more mellow and organized, I am now focused, and I push myself everyday on the track because “my success” is “our success.”

I chose to love because God chose me to be her mommy and I thank him for that every single day.