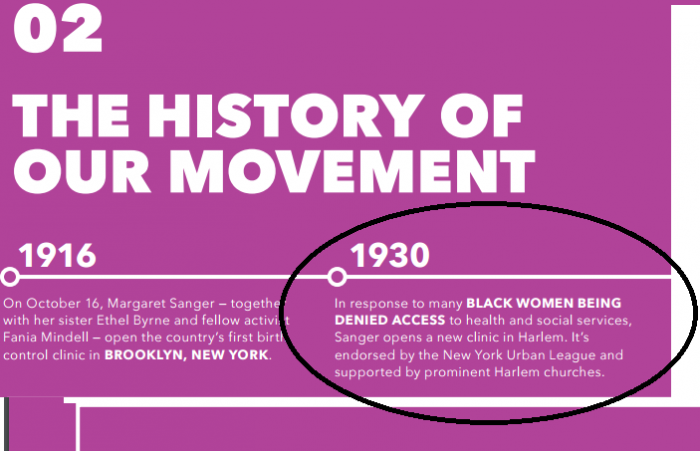 “It was the dawn of a new day in my life… I went to bed knowing that no matter what it might cost… I was resolved to seek out the root of evil, to do something to change the destiny of mothers, whose miseries were as vast as the sky,” Sanger is quoted as saying.

Interestingly, Planned Parenthood’s timeline is a little creative when it comes to its accomplishments.

“In response to many BLACK WOMEN BEING DENIED ACCESS to health and social services, Sanger opens a new clinic in Harlem. It’s endorsed by the New York Urban League and supported by prominent Harlem churches,” the entry for 1930 reads.

That’s right: Planned Parenthood’s history is rooted in eugenics, starting out with its founder, Margaret Sanger. Partnering with black religious leaders, for example, was part of Sanger’s strategy for her “Negro project.” In a letter to Dr. Clarence Gamble, Sanger laid out her vision for the project, which was a collaboration between the American Birth Control League and Sanger’s Birth Control Clinical Research Bureau.

It seems to me from my experience … that while the colored Negroes have great respect for white doctors they can get closer to their own members and more or less lay their cards on the table which means their ignorance, superstitions and doubts.

We should hire three or four colored ministers, preferably with social-service backgrounds, and with engaging personalities. The most successful educational approach to the Negro is through a religious appeal.

We don’t want the word to go out that we want to exterminate the Negro population, and the minister is the man who can straighten out that idea if it ever occurs to any of their more rebellious members.

As documented in the film Maafa 21, Sanger reportedly also wanted the government to put birth control in the drinking water of urban areas with heavy concentrations of minority populations.

Sanger also accepted an invitation to speak for a women’s branch of the Ku Klux Klan, saw birth control as a tool for “weeding out the unfit,” and argued that certain classes of people — minorities, the disabled, the sick, and the poor — “never should have been born at all.”

The annual report makes no mention of that, and instead tries to paint Planned Parenthood as a benevolent organization that just wants to help black women.

Even worse than Planned Parenthood’s eugenicist past is the sad reality that those racist roots have grown to bear fruit today. An investigation by Live Action revealed Planned Parenthood’s willingness to accept donations earmarked specifically for the abortions of black babies.

Black women at Planned Parenthood have also been pressured into sterilization — something that would surely make Margaret Sanger proud.