This article was originally published on Pregnancy Help News and was written by Rachel Leigh.

When Jessica Ricke walked into Women’s Choice Center in 2005, it was with the intention of ending the life of her unborn child through abortion.

Now, a dozen years later, Ricke is the center’s Director of Development, playing a key role in raising $1.2 million since October of 2015—the bulk of which has gone to the purchase of a [Storks] Mobile Medical Unit.

Safe to say, Ricke’s life today is a stark contrast to life as a single 21-year-old facing an unplanned pregnancy.

“I was not in a relationship with the father,” Ricke said. “Growing up Catholic and being against abortion, when I had my own unplanned pregnancy, I became full of fear and wanted to fix the problem but didn’t know what to do. I looked in the Yellow Pages for abortions. The first thing I saw was the Women’s Choice Center ad.”

After making an appointment with the center, Ricke asked a friend who’d previously aborted to drive her to the center, which is directly across from a Planned Parenthood.

“I had no idea there was any difference of the two clinics, I literally walked into the Women’s Choice Center prepared to terminate my pregnancy,” Ricke said. “I wore comfortable pants. I had someone driving me in case I didn’t feel well afterwards.”

As soon as she walked through the doors of the center, Ricke felt an incredible peace, and by the time she left, she was already well on her way to choosing life for her precious child. As the center staff listened to Ricke, it became clear that abortion had felt like her only option, fearful of what others would think and worried she wouldn’t be able to pay for a child.

The center staff helped Ricke get connected with medical insurance and stood by her with material aid like diapers and other baby items that proved to be unexpected life-savers.

Deciding against abortion, Ricke also found the courage to tell the father of her baby about his unborn child. His response came as another welcomed surprise.

“He has stood by my side ever since,” Ricke said. “We are married now and have four beautiful children together. Not a day goes by that I don’t think how different my life would be if I had not went to the Women’s Choice Center for help.”

In the last 10 years, as Ricke grew into her roles as a wife and mother, she also pursued a career outside the home, becoming an aquatics and sports director at the local YMCA.

In 2015, a decade after her unplanned pregnancy, Ricke learned that the Women’s Choice Center was planning a capital campaign to fund a mobile medical unit offering free ultrasounds to women in the Quad Cities area.

“I thought, we can’t support them financially, but I can give them my story and maybe that will help them get the funds they need,” Ricke said.

When Ricke walked through the doors of the center, the memories of being a frightened, pregnant, young woman came flooding back. Once she shared her story with the center’s director, Vicki Tyler, Ricke was asked to pray about speaking at their upcoming fundraiser and even coming to work at the center itself. 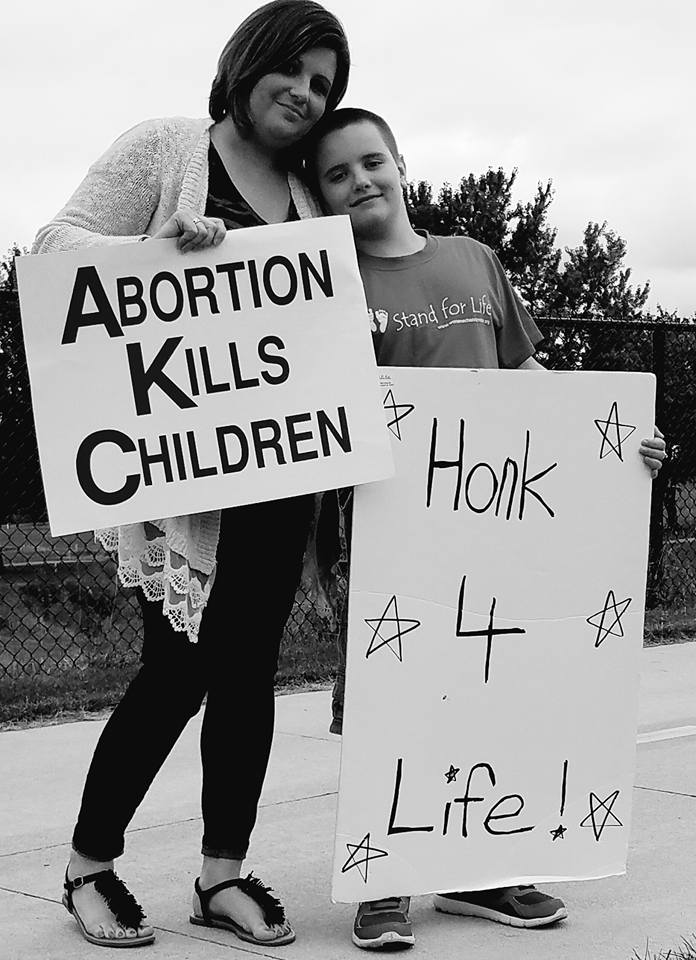 After discussing it with her husband, Ricke agreed that this opportunity came from God. Launching the capital campaign in October 2015, Ricke and the center exceeded their fundraising goal in just six months.

The mobile unit, dubbed “Grace,” and developed in partnership with Save the Storks, has been a godsend to more remote areas of the community.

Besides their mobile unit, Women’s Choice has also played an active role in connecting women with Abortion Pill Reversal, a nationwide network of over 350 medical providers. Since Women’s Choice is right across the street from the soon-to-be-shuttered Planned Parenthood, they’ve hung a banner across their front door saying, “If you have taken the ABORTION PILL, it is possible to REVERSE this decision.”

That strategy is working, Ricke said, noting that several women have seen the sign and called the office the same day they took the first pill in the RU-486 abortion regimen offered at Planned Parenthood.

Having come so close to abortion herself 10 years ago, Ricke now shares her testimony with groups and churches in the area as part of a “Grace Tour” with the center’s mobile ultrasound unit—often with her son, Elijah, in tow.

“To be able to raise a family and be a part of an amazing ministry about families is huge,” Ricke said. “God put me here for a reason.”