So when he heard the girls, ages 10 and 14, calling for help, he was more prepared than many others to go in the water. 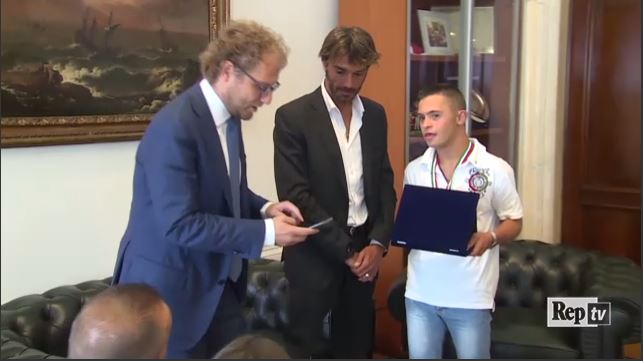 According to Aleteia, the tide was preventing the girls from swimming to shore. As they were being dragged out to sea, Catoia and his father ran in and Catoia helped the younger girl.

He positioned her so her head remained above water as he swam with her back to the shore, and his father followed suit. Lifeguards arrived on the scene, but father and son had already saved the day.

The heroic moment was featured in newspapers across Italy. Former prime minister Matteo Renzi spoke about Catoia’s bravery, and the Italian Sports Minister Luca Lotti expressed congratulations and awarded him with a medal as well as a video message from world championship athletes. Catoia was an overnight sensation.

“There are a lot of sports champions this week so I would like to bring your attention to the thought of the evening,” said Renzi. “[…] I thought that the real champion of the week is called Valerio. This is a paralytic swim athlete, [with] Down’s syndrome who saved a 10-year-old girl who was likely to drown. I think Italy should be proud of fellow citizens like him.”

Italy has strict laws regarding abortion compared to much of the Western world. Abortion is allowed for any reason up to 90 days and after that only in cases in which the health of the mother is at risk or the child is diagnosed prenatally with a health condition such as Down syndrome.

But what’s most interesting about Italy is that there aren’t many doctors willing to perform abortions.

Law 194, signed in 1978 and approved by popular referendum in 1981 allows doctors to refuse to perform abortions on moral grounds. As a result, seven out of ten doctors in Italy are unwilling to abort children.

“The murder of a small human being is not part of a doctor’s cultural heritage,” Massimo Gandolfini, a spokesman for the anti-abortion group Associazione Scienza e Vita told The Local. “[…] there is no reason at all to justify the killing of a child.”

Since most doctors won’t commit abortions after 90 days, it means people with Down syndrome like Catoia get to do what is unthinkable in countries like Iceland.

In Italy, they are allowed to be born, to live, and even to save people from drowning.

Sign below to save children with Down syndrome in Iceland!