When we consider the child in the womb, recent scientific discoveries are nothing short of amazing.

Researchers from Northwestern University in Chicago were able to discover that a burst of fluorescence can be seen at the exact moment fertilization occurs for every new human being. This zinc burst was described as a “flash of light,” an “explosion of sparks,” and “fireworks on film.” People across the world were awed by this discovery that highlights the moment a unique human life is created.

2. Music and sound in the womb

Scientists at the Institut Marques in Barcelona, Spain, researched a preborn child’s ability to respond to sound in the womb. As some suspected, this ability comes at a very early point: when the child is 14 weeks old and her mother is 16 weeks pregnant, she can be recorded responding to music.

Before this research, many believed the child could not hear music until 26 weeks. Yet science continues to demonstrate the human traits of the preborn child at earlier and earlier times in the womb. From the moment of conception, her humanity can be scientifically proven.

The ability to speak and hear language begins before birth. … [A} fetus can feel sound and, at around four months, hear. At twelve weeks the fetus moves spontaneously. At five months the fetus responds to phonemes (the smallest unit of a word/letter that has sound) it hears through the amniotic fluid, spoken by the mother. A fetus will respond to music by blinking or moving to the beat. Dr. Alfred Tomatis, who will be discussed in the next paragraph, used fiber optic cameras to observe the movement of the fetus in regard to sound.

In a study relating to the dangers of cocaine use in pregnancy, a baby’s cry and chin quiver in response to a sound was captured and shown to the world by the Discovery Channel:

The heartbeat has consistently been one of the most recognizable traits of a new life. For decades, scientists have believed that the human heartbeat starts beating in utero at 22 days — usually just at the time a woman can discover she is pregnant. Now, researchers at the University of Oxford have realized that every human being may experience her first heartbeats even earlier. The 2016 study gives day 16 as the time of the first heart beat.

The Endowment for Human Development partnered with National Geographic to make the award-winning documentary, “The Biology of Prenatal Development.” EHD has also released a short video showing a baby’s heart beating at only four-and-a-half weeks after fertilization (which is equivalent to six-and-a-half weeks pregnant). According to new research at Oxford, this baby’s heart has already been beating for about one-and-a-half weeks.

4. A preference for human faces

In addition to the adorable thumb sucking, mouth opening, eye blinking, hand waving, and other cute activities preborn babies participate in, scientists have discovered these children can also recognize faces they see for the first time in the womb. A June 2017 study in Current Biology details the amazing reality of a baby’s high awareness in the womb and her ability to share basic human preferences. Lancaster University’s Vincent Reid explained that the preborn child is “not just a passive processor of environmental information. It’s an active responder.”

“We have shown the fetus can distinguish between different shapes, preferring to track face-like over non-face-like shapes…This preference has been recognized in babies for many decades, but until now exploring fetal vision has not been attempted.”

Early prenatal testing is a scientific advance, but it is also plagued with flaws. Not only can the results be incorrect, but the tests also ignore the very real possibility that diagnosed abnormalities can self-correct in the womb, prior to birth.

In 2016, scientists from the University of Cambridge, the Wellcome Trust Sanger Institute and the University of Leuven, Belgium, discovered that there is a natural process through which many early-diagnosed abnormalities “self-correct.” The head scientist, Professor Magdalena Zernicka-Goetz was motivated to research in part due to a prenatal diagnosis she received for her own son, who was later born completely healthy. She said:

The embryo has an amazing ability to correct itself. We found that even when half of the cells in the early-stage embryo are abnormal, the embryo can fully repair itself. This means that even when early indications suggest a child might have a birth defect because there are some, but importantly not all abnormal cells in its embryonic body, this isn’t necessarily the case.

The scientists uncovered the reality that part of a child’s healthy development in the womb is ridding herself of abnormal cells — cells that, in utero, may lead to a devastating diagnosis. When the child is left to develop naturally, she may be born without any abnormalities at all, just like the Professor Zernicka-Goetz’s daughter, Olivia-Jax (photographed below), and many other children who defy their prenatal diagnoses. Regardless of diagnosis, no child deserves to have her life terminated through the violence of abortion. 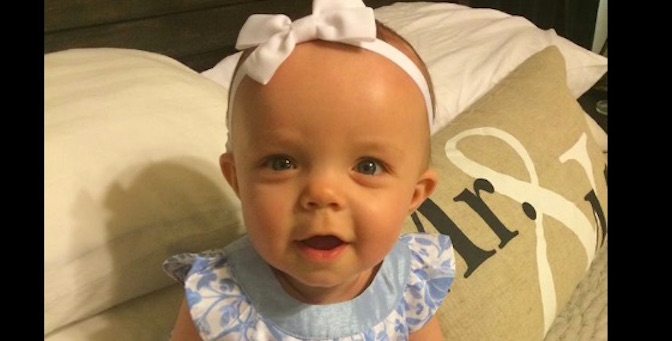 Of course, even without science, mothers know that their babies behave just like the little human beings they are inside the womb. Many parents have shared footage of their tiny sons and daughters waving, kicking, giving a thumbs-up, or clapping in the womb.

Each baby develops her own unique personality while inside the safe space of her mother’s womb, too, and often comes out with just the same characteristics her parents were able to observe during pregnancy. We are all humans, and our stories start on our very first day.

This article was originally published on Live Action News and was written by Kristi Burton Brown.