Doctors performed an ultrasound and told Ellis that everything was fine, but she couldn’t shake the nagging feeling that something was not right. She followed her instincts and switched doctors, looking for a second and third opinion.

Finally, a specialist diagnosed her with an incompetent cervix, something the other doctors had missed.  Ellis’ cervix was already starting to change, as it should when the babies were ready to be delivered, but the boys were much too young to survive. 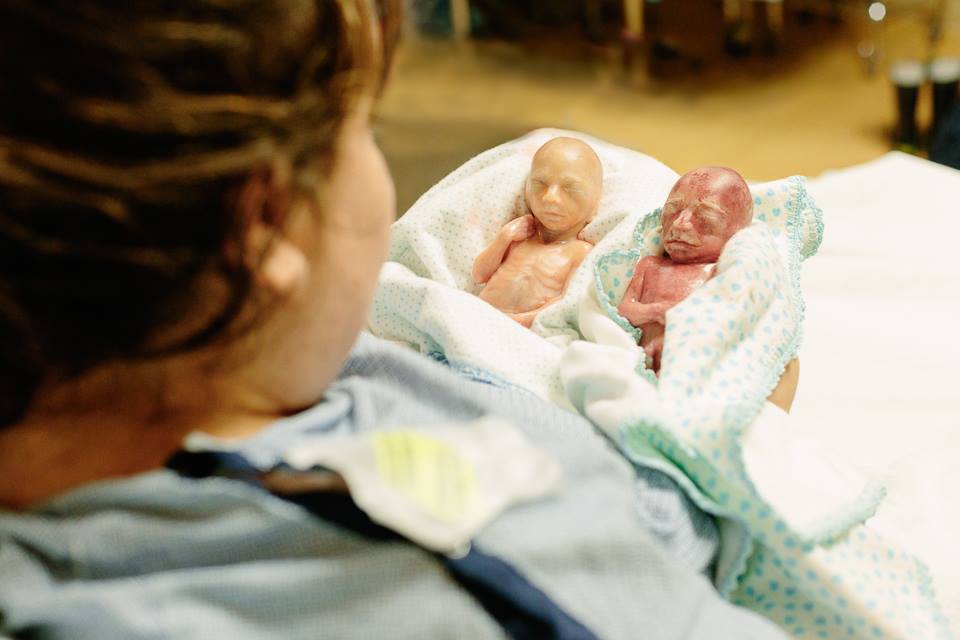 “When I first went in,” Ellis said, “and they noticed that it wasn’t looking good, they offered me abortion and I just couldn’t do that.”

The other option was surgery— an emergency or rescue cerclage in which the cervix is stitched closed. It’s risky, especially once the cervix has begun to open, and there was a high risk of infection or cervical rupture. Plus, the procedure is not guaranteed to work. Still, it was a chance Ellis had to take to try to save her sons.

After the surgery, Ellis remained in the hospital for a couple of days. After being at home for just a day and a half, her water broke. Back at the hospital, Ellis wanted to keep the cerclage in and try to stop labor from starting, but doctors said there was nothing they could do. She had an infection and they had to remove the cerclage. Once they did, Ellis went into labor and had to deliver her boys, Chase and Cooper, at about 22 weeks gestation. The boys lived outside the womb for 30 minutes in November 2014.

On August 6, 2015, Ellis decided to share their photograph with the world through Facebook. Underneath the photo she wrote:

With all this talk of abortion right now, I want people to know that this is what a 22 week old child looks like. This was just minutes after my twins passed away after living and breathing for about 30 minutes last November.

It is legal to abort children at this age in way too many places. While I was holding my babies, wishing they would survive, babies at the same gestation that could have survived are being torn apart and discarded. It makes my heart sad. There are so many better options (adoption being my personal favorite). These are precious children of God. I love you Chase and Cooper, and I hope someone will see this and reconsider their choice.

Soon after, support began pouring in from around the world. Within days the photo was shared over 81,000 times and Ellis had received 300 messages from strangers, some offering sympathy and others sharing the stories of the babies they had lost.

“Originally I was just doing it to bring people’s awareness to what babies look like that young, and with the abortions and everything that’s going on with Planned Parenthood it’s just made me so upset,” said Ellis.

“I just want people to know that there are other options out there and there’s a place to share their grief. It’s okay to talk about it. People are so afraid that people aren’t going to want to hear about their baby who passed away. People do just want to share their story because that’s their child. Most people have never shared their pictures or told their stories.”

In the days that followed, Heather started a blog to share stories of other moms and their babies, showing the world that there are better options than abortion.

“A few people who were pro-choice told me this made me think and said thank you,” said Ellis. “Some who have had abortions said they regret it every day and that the picture made them cry because they feel so much guilt.”

Ellis says she isn’t looking for sympathy and doesn’t want to upset anyone with the photo, but she felt with all the recent news about abortion and Planned Parenthood, sharing the photo of the boys was the one thing she could do to show people the humanity of the preborn. She is amazed at the response.

“It has been so cool to hear other people’s stories,” she said, “and to hear such positive things and people telling me that my babies have touched their lives.”

This article was originally shared by Live Action News and was written by Nancy Flanders.