Doctors suggested a “selective reduction,” but Tracey and husband Paul were adamantly against it.

Tracey told the UK’s Mirror, “The idea of selective reduction [terminating one or more fetuses in the pregnancy] was discussed, but it just wasn’t something I was willing to do. I just thought ‘I’m going to do the best I can for the three of them.’” She added that a selective reduction would have also put her at greater risk for miscarrying all three boys.

Even though Tracey’s pregnancy was a highly unusual circumstance, it is not uncommon for doctors to suggest selective reduction in pregnancies with multiples.

The method used by Dr. Mark I. Evans involves targeting one or more of the preborn children and inserting a needle of potassium chloride into his or her heart. Sometimes the babies move before succumbing to death and get the first needle in an arm or a leg, but once the needle enters a baby’s heart, it is fatal. The idea has alarmingly become a trend over the past few years.

Instead, Tracey had an ablation surgery—which “involves putting a needle and camera into the mum’s womb, and using a laser to seal off the connecting blood vessels in the shared placenta”—in an attempt to remediate the twins’ condition, and during the procedure all the triplets were visible.

Tracey said, “… you could see their little finger nails and they both had blond hair.”

Sadly, the surgery was unsuccessful and the twin receiving too much blood passed away in the womb at approximately 25 weeks. “It was just such a complete shock. They said he’d probably had a cardiac arrest with all that extra blood pumping into his body,” Tracey told the Mirror.

His parents named him Cayden—“little fighter” in Celtic—chosen because “he carried on fighting until his little heart gave up.”

Tracey carried all three boys for seven more weeks. “I knew [Cayden] was in there and with his brothers and I just wanted to keep things that way,” Tracey told the Mirror. “I saw a bereavement specialist and we started discussing the funeral.”

“Those seven weeks I had him in my tummy and I treasured that. I knew once they were born he would be gone. I liked that he was in me and he was safe. For the rest of my pregnancy I could talk to all three of them and I was happy they were all together,” she said.

In the video above, Tracey speaks about receiving bereavement support after the loss of little Cayden. However, she’s reminded of the loss every time someone refers to the boys as “twins.” She said, “…It still hits me when people call the boys twins—they’ll always be triplets…. there isn’t a day goes by where we don’t think about Cayden.” 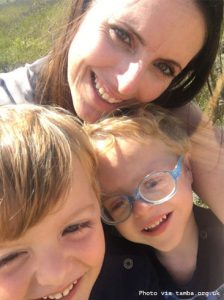 Today, three years since her sons were born, Tracey and her husband continue to honor the life and memory of the son they lost.

“It’s hard, especially on birthdays and special occasions, because I do always wonder what it would be like if Cayden was here with us…. Obviously Henry is his identical twin, so I know what he would have looked like too, which makes things hard. I wonder whether the boys feel something missing—you hear of that multiple bond starting in the womb so it would make sense if they had that feeling of loss,” Tracey told the Mirror.

She says in the video above that James and Henry know about their brother, and ask questions about him often. His grave is just minutes from their home.

Feelings of grief are often complex, and Tracey explained that “There is a saying in our community that it doesn’t get easier, you just get better at dealing with it.”

The same could be said of women who abort their babies and find themselves regretting and grieving this loss later on. Pro-life post-abortion recovery groups like Rachel’s Vineyard and Silent No More can help in connecting women (and men) with support groups and retreats so they can work through their grief and regret after an abortion — grief that is sometimes not fully realized until years later.

As for Tracey, she was grateful to have received support during her time of grief after loss, and now offers that same support and hope to other families experiencing the loss of a multiple, working with the UK group Tamba.

Every day, women like Tracey are pressured into abortion due to terminal prenatal diagnoses or other stressful circumstances. However, nobody should be told abortion is their only option.

Instead, let’s join together to make sure people in unexpected pregnancy situations are supported and loved so they can make life-affirming choices for their children.

We’re asking pro-lifers around the country to help us end the pressure surrounding abortion once and for all. Sign our pledge today!

This article was originally published by Live Action News and was written by Kelli.