CDH is a condition in which the diaphragm does not form properly and this allows the stomach, intestine, liver, spleen, and kidneys to move into the chest. This leads to underdevelopment of the lungs and pulmonary hypoplasia. If the child’s lungs are too small, he may not be able to breathe at birth and will not survive. At least, that’s what doctors say before advising abortion. The truth is, while some children unfortunately do not survive, many do.

“I ended my pregnancy when I was 20 weeks and three days pregnant. I was 32 years old, happily married and overjoyed when I felt my baby kick for the first time. I didn’t want to have an abortion. But my husband and I made the choice after finding out our baby boy was too sick to live outside my womb.”

Miller’s baby’s right lung had not developed as a result of CDH and his left lung was underdeveloped. Doctors informed her that he would need to be intubated at birth and would need to go on ECMO and be placed in the NICU. He would need surgery if he were strong enough.

Miller was distraught, as any parent would be, over the news and the fact that she wouldn’t be able to hold him right away or breastfeed. There was the real possibility that her son might not survive the surgery.

“If I had been forced to carry my baby to term, my husband and I would have to endure watching my belly grow, feeling our baby kick, receiving congratulations from friends and strangers and spending four months getting ready to watch our infant son die.

So, we ended the pregnancy when I was 20 weeks and three days pregnant.

As a woman who ended her wanted pregnancy, I know firsthand that the sacrifice and decision I made to protect my unborn child from real pain is excruciating. Parents do not want their children to ever have to suffer.”

It’s true, parents don’t want their children to suffer. But suffering is inevitable for all human beings. What needs to be considered is this: in attempting to protect her child from “real pain,” Miller made the decision to deny him his life.

In attempting to protect themselves from the sadness of seeing their son ill and not being able to hold him, Miller and her husband decided that their son’s immediate death was the better option. And yet they refer to the abortion as a “sacrifice.”

This made no sense to many mothers who saw the essay and Facebook post and had refused abortion for their children with the same condition — and they made their feelings known: 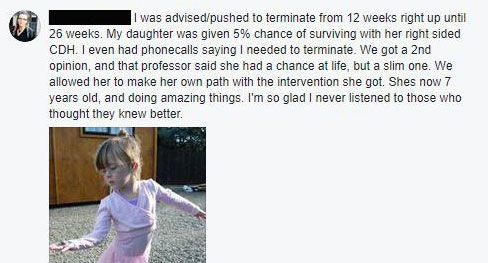 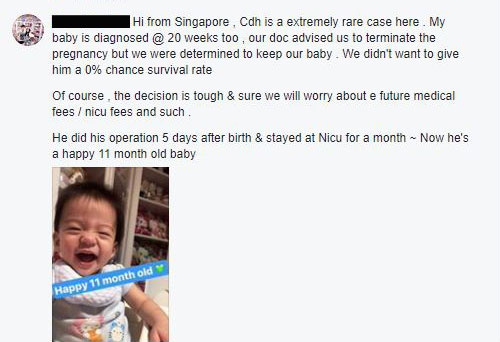 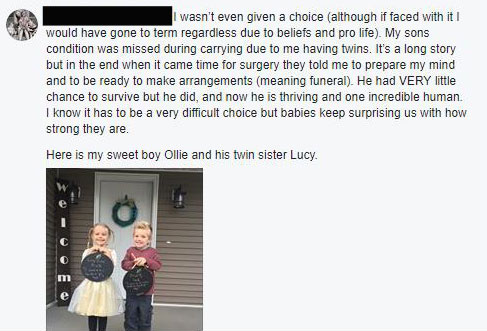 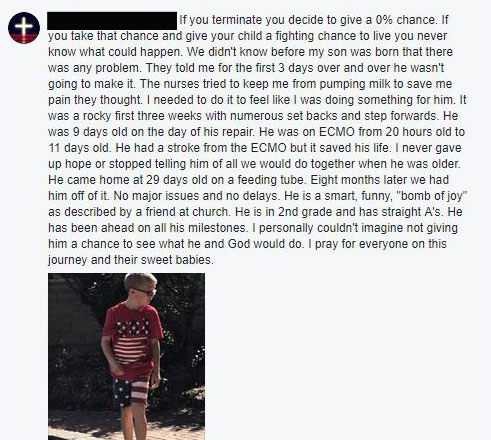 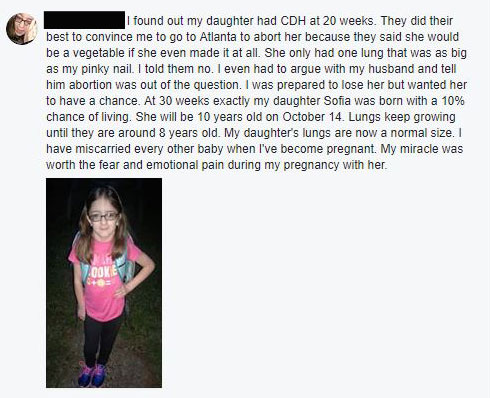 Other mothers were stumped by the fact that Miller was told to abort, saying that they were not advised to abort and that Miller should have gone for a second opinion. Many felt that she was misled by doctors who don’t know enough about CDH.

This is a huge problem in the OB/GYN community. These doctors cannot be and should not be expected to be experts in every prenatal diagnosis. Too many parents are pressured to abort by doctors who don’t have a full understanding of the child’s diagnosis.

Therefore, parents should always receive a second opinion, speak to a specialist, and seek out advice from parents who are raising a child with the condition. Speaking to a specialist and to other parents can help parents facing a new prenatal diagnosis to truly understand what they and their child will face in the future.

The politically charged essay is upsetting to read, especially for any parent raising a child with special needs. It was also upsetting for those parents in the Facebook group who are pro-life:

Even if Miller’s child would have died at or shortly after birth, he deserved the chance to live, to fight for his life. It’s easy to see from the comments that most parents don’t want to give their children a zero percent chance by aborting them.

Instead of offering abortion, doctors should be offering hope and support and doing everything they can to connect parents with specialists so that all of the information is available to them.

Banning abortion at 20 weeks could save children like Miller’s from the bad advice of doctors who cost children their lives and cause a lifetime of suffering for parents.

The future of this bill in the Senate is extremely fragile. That’s why we’ve drafted this letter and we want you to sign it, letting the Senate know you support this piece of legislation.

We’ll send it to Senate Majority Leader Mitch McConnell and Senate Minority Leader Chuck Schumer to let them know where you, and where we all, stand.

SIGN BELOW TO ADD YOUR NAME TO THIS LETTER AND STAND FOR WOMEN AND THEIR CHILDREN!