“It was a callous experience… Honestly, she was never the same again.”

First, perhaps, was an experience I had in my early twenties, right here in Washington, D.C., actually. I had a very good friend who decided she was going to have an abortion. And, despite my talking with her, she was adamant about this. And so we went to a Planned Parenthood clinic.

I observed that she was given no options. There was no conversation about whether or not this was the right thing for her and what her other alternatives might be.

It was a callous experience. And I saw the impact of that abortion on her — not just physically, but emotionally, and especially spiritually. Honestly, she was never the same since.

“His mother had been told to abort him… She refused.”

I met my husband a couple years later, and when I married him, I learned that his mother had been told to abort him. She had him quite late in her life, she had a great deal of difficulty with her previous pregnancies, and so her doctor told her her life was in danger, and she should abort her unborn child. She refused. She was a brave and faithful woman.

In addition to telling these abortion stories, Carly Fiorina opened up about learning that she could not have children of her own. This led her to “understand that life is a precious gift.” Fiorina remarked that on top of her personal experience with abortion stories, “science is proving us right.” 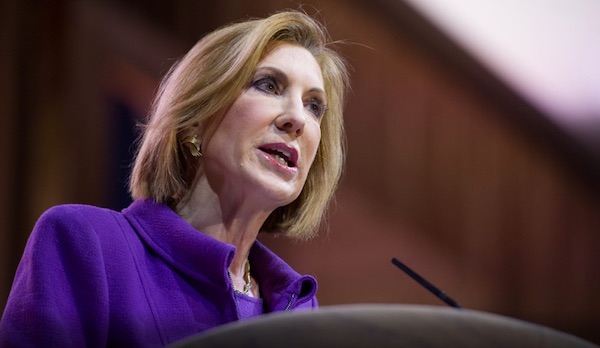 Indeed, scientific experts and decades of medical textbooks conclusively agree that every new, unique human being has his or her beginning at the moment of conception. The development of a preborn child in the first trimester — when the majority of abortions are committed in the U.S. — is nothing short of astonishing.

Szeltner then asked Fiorina about her volunteer work after high school:

“I volunteered in a school for children who were severely disabled in some way — whether it was physical disabilities or mental challenges. Every single one of these children was gifted by God. And I can remember in particular a little boy who had so many challenges, so many challenges, and yet joy radiated out of this child.”

In addition to her political, business, and family accomplishments, Carly Fiorina is also a cancer survivor. Szeltner asked her to explain why she supports defunding Planned Parenthood when the abortion chain claims defunding will prevent more women from having breast exams or detecting cancer. Fiorina responded:

Well, first of all, of course it’s untrue. It’s a lie. Planned Parenthood doesn’t provide mammograms. They provide references for mammograms, but so do pregnancy centers, community health centers. There are all kinds of centers available for women, most of which are not funded by taxpayers, actually, although they are funded frequently by the generosity of donors that can provide a woman access to the holistic health care that she needs, including mammograms.

There is no reason that a woman cannot have access to a mammogram. We don’t need Planned Parenthood to provide that.

I served for a period of time on the board of the GW Hospital in Washington, D.C., and just as one example, this is a hospital that has a tremendous program of outreach to the community. African American women are more subject to breast cancer than are Anglo women. We’re not sure we understand this.

But, GW took it upon themselves to make sure that they have mobile mammograms that move into communities here in Washington, D.C., and make available to women on their, literally on their street corner, in their neighborhoods, screenings.

So, this is a myth that Planned Parenthood puts forward, but obviously it’s a myth that has a big impact because we all want women to have access to early detection which is key to survival in cancer.

Planned Parenthood’s claims of women being without care if the abortion corporation were defunded are provably inaccurate, and, as Carly Fiorina mentioned, many true health care organizations are ready and willing to give women the holistic care they need.

Again and again, real abortion stories prove that Planned Parenthood is no friend to women.

This article was originally published by Live Action News and was written by Kristi Burton Brown.